After five years as a political prisoner in an Iranian jail, Anoosheh Ashoori had almost given up hope.
Then he found running.
He completed this year's London Marathon to raise awareness of the struggles of ordinary Iranians at a time of massive political upheval.

Words and Photography by Adrian Brune

As he runs loops around London’s Greenwich Park, Anoosheh Ashoori’s mind is often in two places: the metropolitan surroundings on a clear autumn day, and the stark walls of Evin Prison just outside of Tehran, Iran.

It's just over five years since Ashoori, 68, first found himself inside the notorious interrogation and detention center for political dissidents — and almost exactly five years since Ashoori tried to take his own life out of despair and fear for his family. But somehow in the midst of his ordeal with the regime, the encouragement of his fellow inmates and two books saved his life and set him on his current path: What I Talk About When I Talk About Running by Haruki Murakami and Man’s Search for Meaning by Victor Frankl, a Holocaust survivor.

“I would be in the prison doing my running and dreaming of being out in the park or with my family,” says Ashoori, a slight, bald man with a neatly trimmed mustache, wearing  a Hostages International t-shirt and sporting a neoprene knee brace for an achy tendon. “Now I am out here and imagining my friends next to me.

“It’s a bit… what is that movie? It’s a bit like ‘American Werewolf in London’ when you are two people at once, or trying to see the comedy through the horror.”

Sentenced to 10 years for spying in 2017, Ashoori, a British-Iranian entrepreneur who moved to the UK 20 years ago, was released with Nazanin Zaghari Ratcliffe in March 2022 after the UK paid a £400 million debt to the Iranian government. He completed the last of his training runs for the London Marathon on October 2nd with his son, Aryan, who was signed up but who could not run the marathon due to a Covid-19 diagnosis. Together they are raising money for Hostage International and Amnesty International, the two NGOs most involved with his family’s effort to free Ashoori.

“I think a marathon is very similar to the process our family went through…” Aryan Ashoori has written on his TCS London Marathon donation page. “The step-by-step nature of the run and the need to focus on the present moment is similar to the day-to-day coping mechanism that we developed throughout our quest. The only difference is that we can train and prepare for it this time.”

The family’s quest for its patriarch’s freedom began, in earnest, nearly two weeks after Ashoori’s disappearance in August 2017. Ashoori, an engineer who was honored in the 1990s by the Iranian government and then-president Akbar Hashemi Rafsanjani for his invention of seismic-resistant concrete, had returned to Tehran to visit his aging mother. “After about 10 days there, I went to the market to have the zip of my suitcase fixed. When I reached the bottom of the hill where she lives, a car cut me off,” Ashoori says, as he sips his coffee.

In his recollection, four men jumped out – agents of Iran’s Ministry of Intelligence and Security (MOIS) – and handed him a piece of paper before he was told to put on a blindfold and place his head in the lap of one to disorient him. “It was a warrant for my arrest. They had accused me of spying for the Israeli government,” Ashoori says. After two weeks of interrogation, followed by solitary confinement in a 4ft by 6ft cell with lights on 24/7 and the din of screams and moans, the MOIS confiscated Ashoori’s computer devices and turned him over to the Islamic Revolutionary Guard Corps (IGRC) which held him for another two weeks.

“One of the intelligence officers said he was as close to me as my own jugular vein,” Ashoori says. “I replied, ‘good, then you know you won’t find anything on me.’” But Ashoori was more worried about his wife and two children back in England. “If [the intelligence service] could kill Shapour Bakhtiar, [the former Iranian prime minister killed in Paris], they could get to anyone,” he says. Agents assured Ashoori they could, after showing him multiple photographs of his wife and daughter, Elika.

The once heavy-set man decided he had one option to get himself and his family out of this situation. He would commit suicide. First Ashoori carved a shiv out of a plastic spoon. When guards saw the blood and took away his blankets for warmth, he opted for a hunger strike and went 17 days without food, taking as little water as possible to avoid a stroke.

“Because of knowing who my dad is – very selfless, always optimistic – I never thought he would do something that would destroy us,” says Elika Ashoori. “To know that a regime could bring someone so positive to such a level caused me to reach my lowest moment. The level of rage within me was so much.”

Two things changed in this time. One: Ashoori was handed Murakami’s and Frankl’s books from fellow prisoners; and two: his family decided to go public with his detention. “I was moved to a new cell with three men and – Middle Eastern culture favors the guest – they kept saying, ‘if you do not eat, we will not eat.’ In that way they coaxed me back to health,” Ashoori says. Eventually, he started joining the other men in the yard for daily exercises, running for two minutes solid, then ten minutes, then 30 and so on… until he reached two hours and 20 minutes. “We had cakes and tea to celebrate.”

Meanwhile, Ashoori’s family took a cue from Richard Ratcliffe, the husband of Zaghari-Ratcliffe, and started to undertake “empty chair” protests opposite Downing Street. “Because my dad was so apolitical, we didn’t say anything. We didn’t want to poke the regime,” says Elika Ashoori. “I was against that from the beginning and my one regret is that we didn’t go bigger sooner. I told my mother we cannot afford to be nice about this; we have to be loud; we have to be ruthless. We didn’t turn into activists overnight, but in hindsight, if we hadn’t been vocal he wouldn’t have got out.”

Ashoori’s UK lawyers also lobbied the Foreign, Commonwealth and Development Office – and former Foreign Secretary, now Prime Minister, Liz Truss – for diplomatic protection. By that time, the Iranians had openly linked the release of both Zaghari-Ratcliffe and Ashoori to the money owed to Iran by the UK for reneging on a mid-1970s weapons deal that went unfulfilled after the 1979 Islamic Revolution.

On the day Ashoori was released, he was still advocating for more names to be added to the flight manifest, among the dozen or so PhDs, artists, and writers who used to gather in Ashoori's corner to read, carve wood, exercise and talk. But at Mehrabad Airport, having exhausted his appeals, he boarded a nearly empty Omani Air Force plane with Zaghari-Ratcliffe at one end and him on the other. They finally spoke about their oredal when they landed at RAF Brize Norton.

For three to four months, Ashoori says he was simply so “overjoyed at being released” that he took in whatever he missed — full English Breakfasts and his favorite beer — and rebuilt his body. When the London Marathon gave him and his son special dispensation to run, he began training in earnest: a routine that the retiree has said has helped ground him and stave away the inevitable anxiety that often comes from torture. While not aiming for a particular personal best, Ashoori nonetheless notched a 2:19 half marathon over the summer.

While his daughter says Ashoori is not the same man as when he left that August day, she added that since he has been back, “he is so driven himself,  we are learning from him — getting inspired from him.

“One of the hardest things in the past three years was to humanize my dad because of his background, his color, his former country. To see all the other people get behind him now is truly amazing — it’s inspiring.”

On Sunday, October 2, Anoosheh Ashoori finished the marathon in 5:28:28 wearing his prison uniform, which he had smuggled out of Iran for the occasion, along with 3,000 pages of notes for a memoir. All in all, he raised £20,000 for his charities. 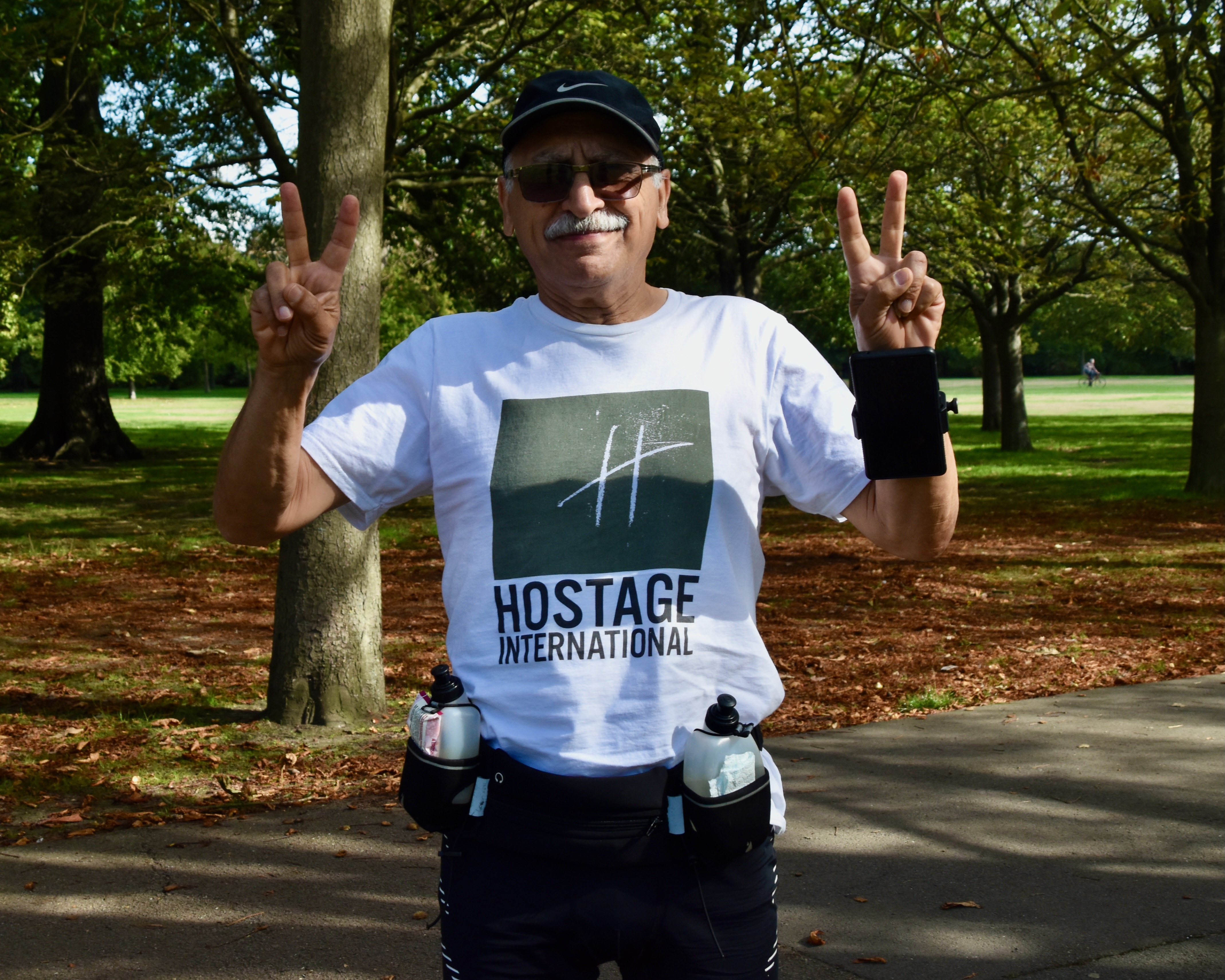