Words and Photos by Mike Behrends

“All I do is keep running in my own cozy, homemade void,
my own nostalgic silence. And this is a pretty wonderful thing.”
– Haruki Murakami, “What I Talk About When I Talk About Running”

It's somewhere between 2018 and 2019. My wife Sarah and I are living in Samsun, a city of around one million in the Black Sea region of northern Turkey. She's teaching at a university on an English fellowship through the U.S. Department of State, while I'm 'working remotely' but mostly doing absolutely nothing other than running.

Samsun is a modern, mountainous coastal city speckled with sites and ruins that remind you of its ancient past. Everything you’d imagine a remote Turkish city to have - mosques, markets, street cats - it does. There are images of Mustafa Kemal Ataturk on anything that’s flat, a population of people who mostly speak Turkish or Arabic. In its sprawl, there’s trains, buses, dolmuş taxis, an international airport with direct flights to Frankfurt, and, most importantly for my purposes here, Samsun has a flat, uninterrupted 12km running path along the sea. It hugs a long beach, where teens sit and ponder, families swim, men drink black tea while fishing for anchovies from various piers, city workers sweep sand from the bases of life-sized, seagull-shaped payphones.

Samsun's temperate climate is generous to runners, so I start running this path daily. 5k, 10k, 15k, whatever. I have to. For one, I'm signed up for the Istanbul Half Marathon - my first - and can’t slouch. And I’m homesick as hell. I miss holidays back home, birthdays, and conversations that don't involve Google Translate. So, each morning, after a breakfast of instant coffee, apricots, and Nutella on bread, I hit shuffle-play on a massive, strategically nostalgic playlist and run. 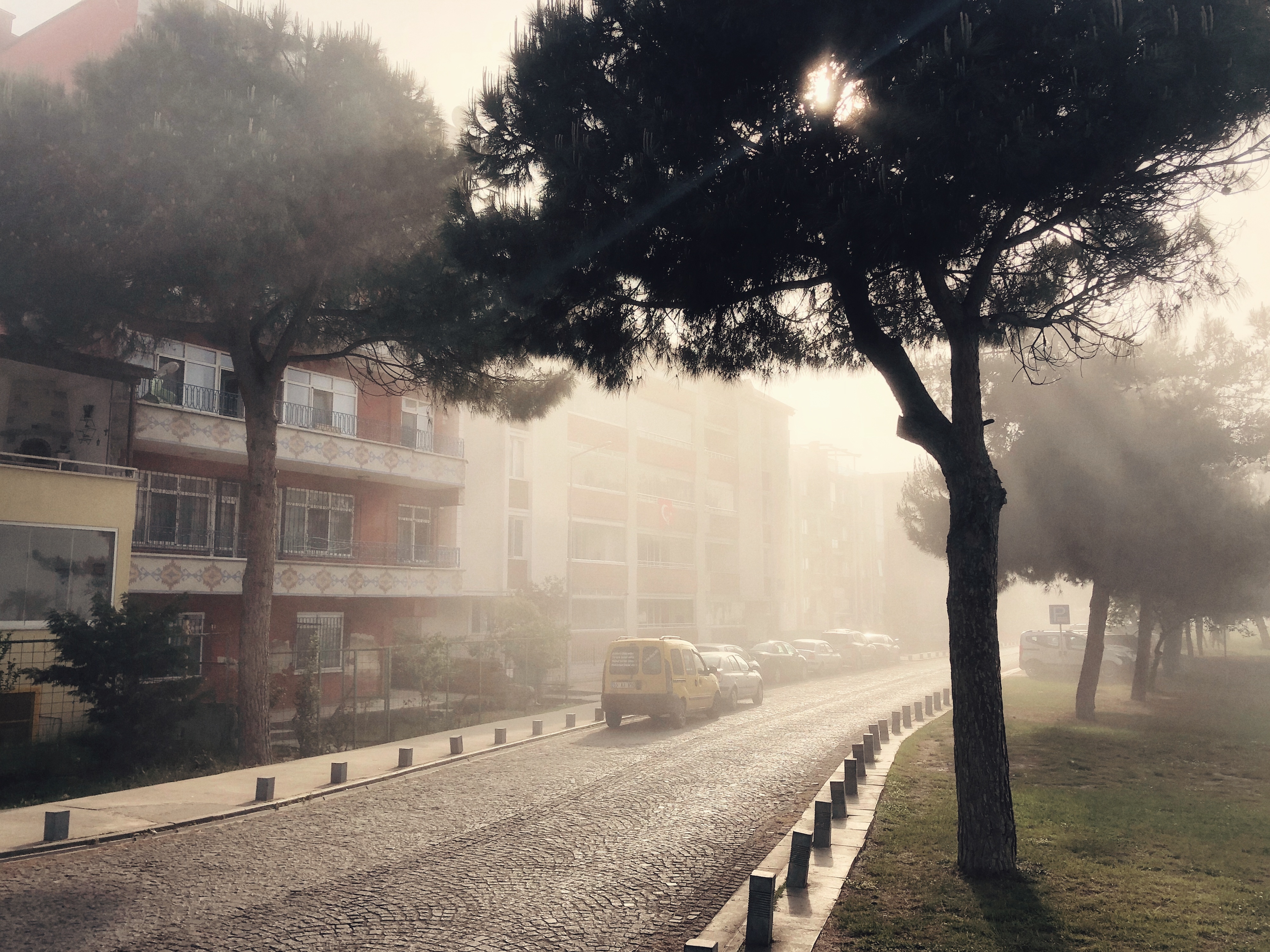 Suddenly I’m no longer running along the Black Sea, passing the Yeşilyurt Mall with the McDonald’s whose employees wear McDonald’s jeans, to Aslan Heykeli Park near a strange Amazon warrior museum. Or passing Bakku Café where they call me “Flat White” – either because of my appearance or my daily drink order – beyond the stand of evergreens by the basketball court that smells like Wisconsin. Or running beyond Mustafa’s convenience store where I splurge on Turkish wine and Pringles, passing my landlord Zafer’s surprisingly opulent real estate office, up to the marina where the path widens out, transitions to gravel, and curls itself into the sea to create two more runnable kilometers of breakwater. My body is moving in Samsun, a line of palm trees on my left and a sea that stretches to Russia on my right, but I’m elsewhere in time.

My playlist shuffles to Land of Talk’s watery, melancholic jam “Quarry Hymns” and now it’s 2012. I’m a fresh college graduate working at a coffee shop and living with Grandma in a suburb of Minneapolis, Minnesota. I’m out for a nightly walk in her neighborhood after we’ve eaten Pizza Hut at 5pm and I’ve put the tea kettle on for her while she does crosswords.

Now I’ve just reached the billboard along the path that’s either promoting a Samsun mayoral candidate or real estate agent. I know the palm tree underneath it is my 5k mark. As the first bit of fatigue hits me, the playlist shuffles to the next song and helps me push through.

The chunky, metronomic guitars of Taking Back Sunday’s “Set Phasers to Stun” keep me on pace while taking me to the Fall of 2004. My childhood best friend Brock and I are driving in my rusted out ‘88 Jeep Wagoneer. We’re in a joke band called The Sewage Tanks. We’re driving to school riffing over a decade’s worth of inside jokes. And we’re late for basketball practice. We’re driving circles around the lake in town for what feels like years. Never shutting up, never growing up.

With the first pull of the fiddle in Trampled By Turtles’ “Empire,” it’s now 2008 in Duluth. It’s another Thursday night in a basement coffee shop with Jen, feeling profoundly changed by the songwriting of a little-known folk band. I’m skipping class to drive solo up the moody, rocky Lake Superior shoreline and bumming cigarettes off local folk hero, Jim Hall, in his van outside the Thirsty Pagan.

I’m now approaching a section where the sandy beach has ended. Waves crash over boulders and onto the pavement in front of me. The wet path forces me to snap out of my trance. I high-step my way around sea debris to the only “elevation” on the entire run—a 7’ incline over the bridge to the breakwater. As the paved path becomes dirt, I once again exit the present.

Now it’s the ‘90s thanks to Brooks & Dunn’s “Neon Moon.” It’s playing from the boombox on the workbench on my family’s farm in southern Minnesota. It’s playing in the grain truck, where I know a seasonal farmhand named Glen has stashed a stack of Playboys under the bench seat. It’s playing as I’m riding inside the combine with Dad, hypnotically watching stalks of corn get violently sucked into the header, smelling the scent of diesel and rich, black dirt.

Broken Social Scene’s proggy “7/4 (Shoreline)” zaps me to 2010 in Madison, Wisconsin, where I’m working on a campus paint crew, reviving dorm room after dorm room with a shade of white called Winter Mist. It’s less of a job and more of a way to kill time until the next text from my new girlfriend, Sarah.

Then Adult Jazz’s song, “Springful,” pulls me closer in time. As the opening vocals transition into an ominous, melodic guitar line, I’m back to our very first week in Turkey. I’m at sea level on Ataturk Bulvari looking west towards the idyllic green mountains. I’m not yet the kind of person who carefully crafts autobiographical playlists for energy. I’m not even someone who runs every day yet.

I begin to approach the 7’ tall, colorful S-A-M-S-U-N sign near the fishing pier, across from Yellow Taxi Pub. This is where I always stop my sessions. I pause the playlist and look down at my watch. It’s somehow been 13 kilometers since I last checked into real-time. And now, after a dizzying tour of past lives, this tangible representation of the city of Samsun is where the nostalgia, quite literally, ends. I’m in the present. In the now. There’s no music for this moment, just yet.

Fast forward two years later: I’ve trained for a handful of 5k’s, another half, and a marathon, something interesting has happened. Those same songs I used in Turkey in a homesick attempt to connect back with the States, now take me right to those daily training runs along the Black Sea. I’m running around Lake Nokomis in Minneapolis, but I’m also running by the mall with the McDonald’s jeans, the Amazon museum, the coffee guys who call me “Flat White,” the basketball court’s evergreens, Mustafa’s, Zafer’s, the marina, the breakwater. The nostalgic effect has become circular, giving each song new meaning while continuing to serve the same training purpose: making the miles go by in a blur, while taking a lifetime to finish them.