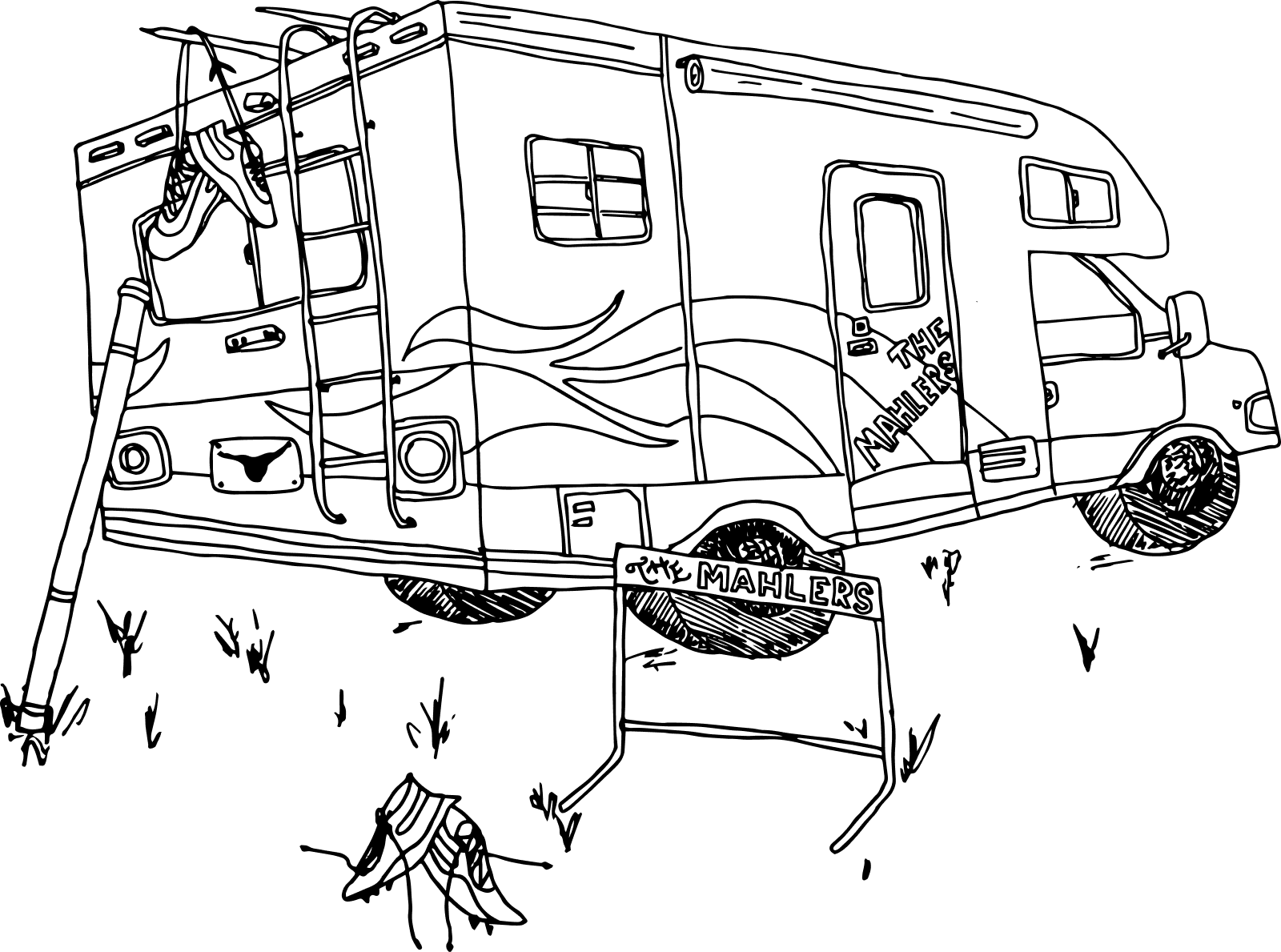 The Long and Winding Road

Having placed second in the 2022 US Champs, Ashtin Mahler made it to Worlds, and is returning to Eugene in triumph, after a disappointing 2021.

For many athletes, the road to Eugene is long and bumpy. For Ashtin and Wolf Mahler, that was literally true. In 2021, the Texas-based couple and their two dogs drove their RV over 2,000 miles to compete in the US Olympic Trials, where Ashtin was set to compete in the heptathlon. Three days into their journey, they were sideswiped by a pickup truck pulling out of a blind turn in rural Colorado. The camper, which had only been in their family for two months, picked up a long, red scar along the right side. Fortunately everyone involved was unharmed.

The next day, the camper blew a tire. It was almost as if the track and field gods were trying to keep them away.

Making it work in less-than-ideal conditions is something of a strength for the Mahlers. Wolf qualified for the 2016 Trials in the decathlon as a sophomore in college, but since graduating, it’s been a rough few years. A five-time NCAA All-American who set his personal best in the decathlon in 2017, Wolf has struggled to stay healthy the past few seasons due to a combination of training wear and tear, and another ill-timed car accident in 2018. He’s stepped away from the decathlon for now, but more and more he’s embracing coaching, including offering training guidance to his wife.

The high school sweethearts, who met at a track meet in New Mexico nine years ago, competed together as multi-eventers at the University of Texas and got married two months before the COVID-19 pandemic hit the United States. En-route to Eugene, they returned to the track in Albuquerque where they first met for a training session.

The couple do not work typical 9-to-5 jobs, instead making ends meet through a series of odd jobs, coaching and training camp gigs, support from family, and a burgeoning Youtube career. The latter doesn’t pay the bills yet, but the couple is engaging on camera and the many disciplines required of multi-eventers offers a treasure trove of training content.

Neither has a professional contract, but Tracksmith’s Amateur Support Program offers unorthodox benefits for multi-eventers in particular. Typically, an athlete locked into a shoe contract must train and compete in their brand at all times, but Ashtin’s taste in competition shoes is varied, and being a Tracksmith athlete allows her to jump in one brand, throw in another, and run in a third or fourth.

There’s not a routine, a true home base. And yet the hodgepodge of training setups and travel plans always seems to come together. “Our life has become one big adventure,” Ashtin realizes.

Ashtin entered the 2021 Trials with the #2 mark in the US in the heptathlon, but injuries were a persistent challenge in the weeks and months leading into the competition. After recovering from a sprained knee ligament earlier in the spring, she picked up a nagging pain in her hamstring that made explosive movement painful. So much of the heptathlon is about staying healthy throughout the two-day, seven-event competition, so multi athletes become experts in more than their event disciplines: they must be able to manage their bodies through training and competition better than any other track and field specialist. Wolf, having battled his share of injuries as well, is an invaluable resource for rehab support.

In 2021, they parked their RV in the Eugene Mobile Village, across the street from where Steve Prefontaine famously lived after the 1972 Olympics. For tooling around town, they drove a U-Haul pickup truck because it was cheaper than a rental car. Their dogs Bojack and Dory hung out in the camper most of the day, which is powered by solar panels and, mercifully, air-conditioned.

Access to AC became not just a luxury but a necessity in the second weekend of the Trials, when temperatures entered triple digits for both days of the heptathlon competition. The new Hayward Field facilities offered some reprieve between events, where athletes could hang out in the underground warm-up area, but out in the sun, the brutal heat affected every event. “Getting into the blocks, my hands were literally cooking on the track,” Mahler remembers.

Managing the emotional rollercoaster of the heptathlon is as big a challenge as the physical strains of competition. Through the heat of the Olympic Trials, the long, grueling competition that saw at least one athlete hospitalized, and nagging injuries flaring up in the worst ways, each challenging moment of the two days can seem to stretch into a drawn-out battle in a matter of seconds. At Trials, Ashtin had personal bests and critical stumbles, moments of triumph – including an Olympic Trials record in the javelin – and heartbreaking misses.

In the end, she finished fifth with 6,273 points, only 20 points off her lifetime best in grueling conditions. For Ashtin, it felt as if her body had reached its limit far earlier than her will, and though she acquitted herself well despite months of setbacks, she left Eugene still wanting more.

The months following Olympic Trials were a period of rest and reset, of reflecting on the past and preparing for the future. The long drive home ended with the bad news that the small fender-bender did just enough damage to total the RV. Giving up the camper was more than a financial hit: it closed a chapter marked 2021 on a sad note. The Mahlers moved into a small studio apartment near Wolf’s parents, got through a nasty bout of COVID in the fall, and financial challenges led them to picking up a pair of realtor licenses as a side hustle. 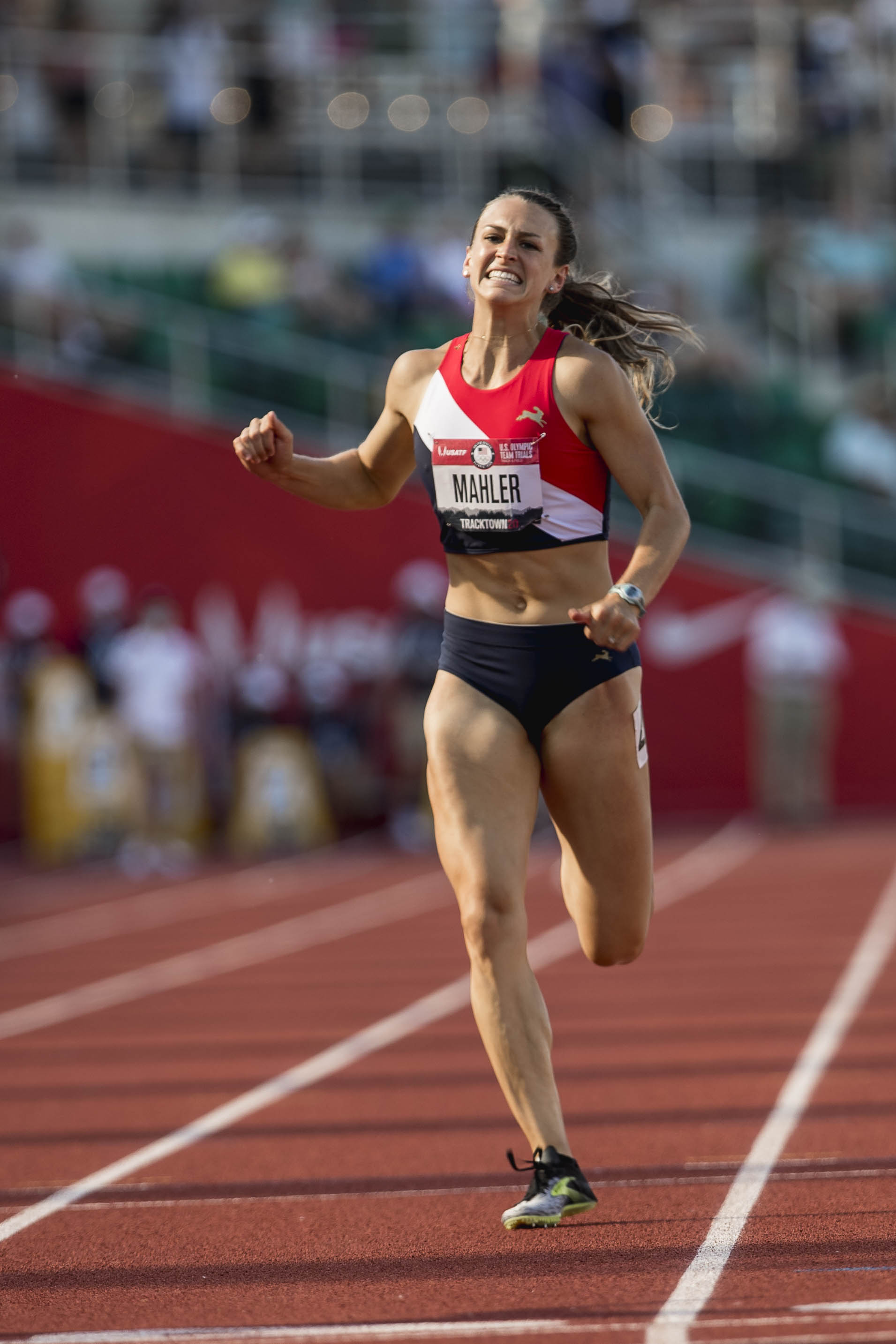 January 2022 arrived with a new year and a new season, and of course: a new camper. In May, Wolf surprised Ashtin with a 1977 Silver Streak fixer-upper that the couple had their eyes on for a few months, and suddenly, the couple and their dogs had a new mobile home. By this time, Wolf had taken up a new event as well: the 400-meter hurdles, an event he hadn’t contested since trying it once way back in 2014. He qualified for USAs with a 51.07 personal best, finishing 19th overall.

The national championship for combined events looked a little different this year, as USATF hosted a standalone meet in Fayetteville, Arkansas in early May. The extra time allowed multi-athletes greater recovery, rather than competing in two heptathlons a mere three weeks apart as the track and field championships would necessitate. The field looked different too, as Olympic Trials champ Annie Kunz did not compete and two Tokyo Olympians, Kendell Williams and Erica Bougard, did not complete all seven events.

Despite an up-and-down start to the season, Ashtin showed up to Fayetteville ready to perform. After placing fourth in the pentathlon at the US Indoor Champs, she has a sense that if she could make it through the outdoor season healthy, she’d be in the mix for the team. Because the pentathlon does not include Ashtin’s secret weapon: the javelin.

Javelin is traditionally not an event where multi-eventers excel relative to other specialties. The best heptathletes tend to be strong jumpers, even occasionally competing individually in the long jump or hurdles, but the throws events are seen more as power-through-it bridge events. Not for Ashtin, who consistently wins heptathlon javelin competitions by four or five full meters. Ashtin’s personal best of 53.01 meters would’ve placed her eighth overall in the open javelin at the US championships this year.

In addition to winning the javelin by an astonishing 8 meters, Ashtin also improved upon her high jump mark from Trials, winning that event as well, and moved up the rankings in the 100-meter hurdles. Her total score was lower than in 2021, at 6,184 points, but her place was higher: she finished second, her highest placing at a U.S. championship to date, and her world ranking secured her spot on Team USA for the first World Athletics Championships ever on US soil.

The Mahlers now return to Eugene in triumph after leaving in defeat, and Ashtin gets to trade her red, white, and blue Amateur Support Program singlet (temporarily) for the official Team USA gear. Since USATF is footing the bill, there will be no long RV journey; just a quick plane ride, and the couple is swapping out a trailer park for a hotel room. It feels like a true full-circle moment after coming so far to fall short last year, and while the road was a bit longer than expected, the scenic route has made the destination all the sweeter.

The heptathlon is an odyssey. There are highs and lows, victories and defeats, brief moments of excitement and long periods of waiting. It’s perhaps both the most and least solitary event, where athletes must remain focused inward for hours or days at a time, but where competitors form a tight-knit community. For the Mahlers in particular, their love for and struggle with the multi-event discipline has defined not just their relationship and their careers, but their entire lives.

“Blessed” is a word Ashtin uses a lot to describe hers and Wolf’s journey. The path they’ve forged for themselves isn’t always easy, but they find a way to make it work together.