More than a Title

On June 23rd, 1972, Title IX was written into law. In the-half century since, it has done a tremendous job of expanding opportunities for women in education and sports. But as demographics change, universities are increasingly undermining the spirit of the law with the outcome of reduced opportunities.

Spring 2021. The athletes of Clemson’s women’s track team are listening intently to Lori Bullock as she explains precisely what they have signed up to by engaging their school in legal action. Bullock, one of the preeminent lawyers specializing in Title IX, is speaking over Zoom, but the young women of Clemson are rapt. This case will be momentous; they will be publicly named, and yet, they are resolved in their commitment to the cause. As Bullock explains the process, the track women, whose faces reflect the diversity of track and field and its status as one of, if not the most diverse sport in NCAA, take in the information, accepting the challenge of suing their university in order to save the men’s track team. For years universities across this country have been subverting the spirit of Title IX in order to reduce or remove opportunities in the name of compliance and equality. The women of Clemson want no part in that: instead, through legal avenues, they have committed to taking Title IX back to its original spirit.

Title IX was created in order to ban sex-based discrimination in any educational program that receives federal funding. The law was designed to address sex and gender-based discrimination in education, things that were missed in the Civil Rights Act of 1964 (which itself barred discrimination only on the basis of race, color, and national origin). Although Title IX is known today mainly through its impact on college sports, the law was created to provide a range of protections ranging from employment discrimination to sexual harrassment and assault. Still, the law has greatly impacted college athletics as universities are required to provide equitable opportunities and levels of support for sports among the genders.

The law has been enormously successful in expanding sporting opportunities for female students as the number of women competing in college has increased six-fold since the law’s passage in 1972. Title IX is objectively good law, formed from a position of equity and fairness. However, universities have engaged in a great deal of chicanery in order to meet Title IX compliance, chicanery that disservices both women and men.

In order to achieve Title IX compliance, a university must ensure that the athletic opportunities it provides are proportionate to its undergraduate gender ratio. If 56% of the undergraduate population are women, roughly 56% of that university’s varsity athletic opportunities should go to women. Female college enrollment is increasing nationwide, whereas male enrollment has been in decline. This means that many universities are seeing the population of undergraduate women tick up in percentage terms compared to men. As a result, in order to stay compliant with the law, universities that find themselves in this situation have to ensure that athletic opportunities adapt to account for the changing demographics of their undergraduate populations. If a university goes from 56 percent to 59 percent female enrollment, the ratio of female to male athletes needs to also increase. The simple solution to achieving athletic proportionality would be to expand opportunities for women. That would be within the spirit of Title IX. Instead, universities often finagle the numbers using accounting trickery in order to reach Title IX compliance without materially expanding opportunities for women.

After the meeting ends, the women stay on the call to collectively process what lies before them. They finally understand how Title IX works and how the law can use it against them. If they do not pursue legal action against the university, the university could, in theory, decide there are too many athletic opportunities for women and reduce their roster to account for the imbalance created by cutting the men’s programs. “We did not really know how exactly everything worked Title IX-wise before Lori explained it to us,” says White, “but afterwards, we understood that they could come after our team too – we wanted to press on anyway. If I was putting myself in jeopardy, so be it. I mean, I had a full scholarship, and I knew that I was probably going to continue as a fifth-year for grad school, but I knew that I wanted to fight for the men’s team no matter what. We’re family.”

The NCAA counts cross country, indoor, and outdoor track as three distinct sports even though the sports function effectively as one. This means that a university’s women’s and men’s track and field and cross country programs count as six sports, three per gender. When counting athletic opportunities for Title IX compliance, track athletes can be counted two or three times, depending on how many seasons an individual athlete plays. A woman who runs cross country, indoor and outdoor track counts three times. Since track and field and cross country athletes can be double and triple counted, teams of about 50 athletes often count for about 120 athletic opportunities. These athletic opportunities count towards a university’s female-to-male athlete ratio.

Women’s track and field and cross country is often one of the sports that serves as a counter to football. Football rosters at many universities are well over 100 athletes, and football, unlike most other sports, does not have a female equivalent. Since football has such a large roster with no large female sport to naturally balance it, universities look to sports like women’s track and field and cross country, and women’s rowing as roster sinks – places where they can drive up their female athletic opportunity numbers in order to maintain proportionality compliance. Adding seven more women to your cross country roster nets you 21 athlete opportunity spots. This is where things appear less simple, less fair – seven will simply never equal 21.

“You know, I was really impressed with a lot of the cross country women,” says White. “Many of them were walk-ons, so in some ways, the cut would have affected them more since they were filling up roster spots, but in other ways, the cut wouldn’t have impacted them in the same way as it would have impacted those of us who were on scholarship. Still, if I were in their position, I don’t know if I would have cared as much. But they were really committed; we all wanted to bring the men’s team back.”

The women of Clemson’s track and field and cross country program displayed immense bravery and selflessness in involving themselves in a formal legal battle with their university in order to save the men’s team. It took just one meeting for them to understand what was being asked of them and for them to steadfastly commit themselves to fighting to protect opportunities for the men’s track athletes and the countless others that would come after them. But the task of ensuring that educational opportunities benefit both women and men should not rest on the shoulders of students – universities, the NCAA, and the federal government should not be offloading their responsibilities to students who have to decide whether they wish to expose themselves to scrutiny and retaliation for simply fighting to ensure that educational opportunities via athletics are preserved. 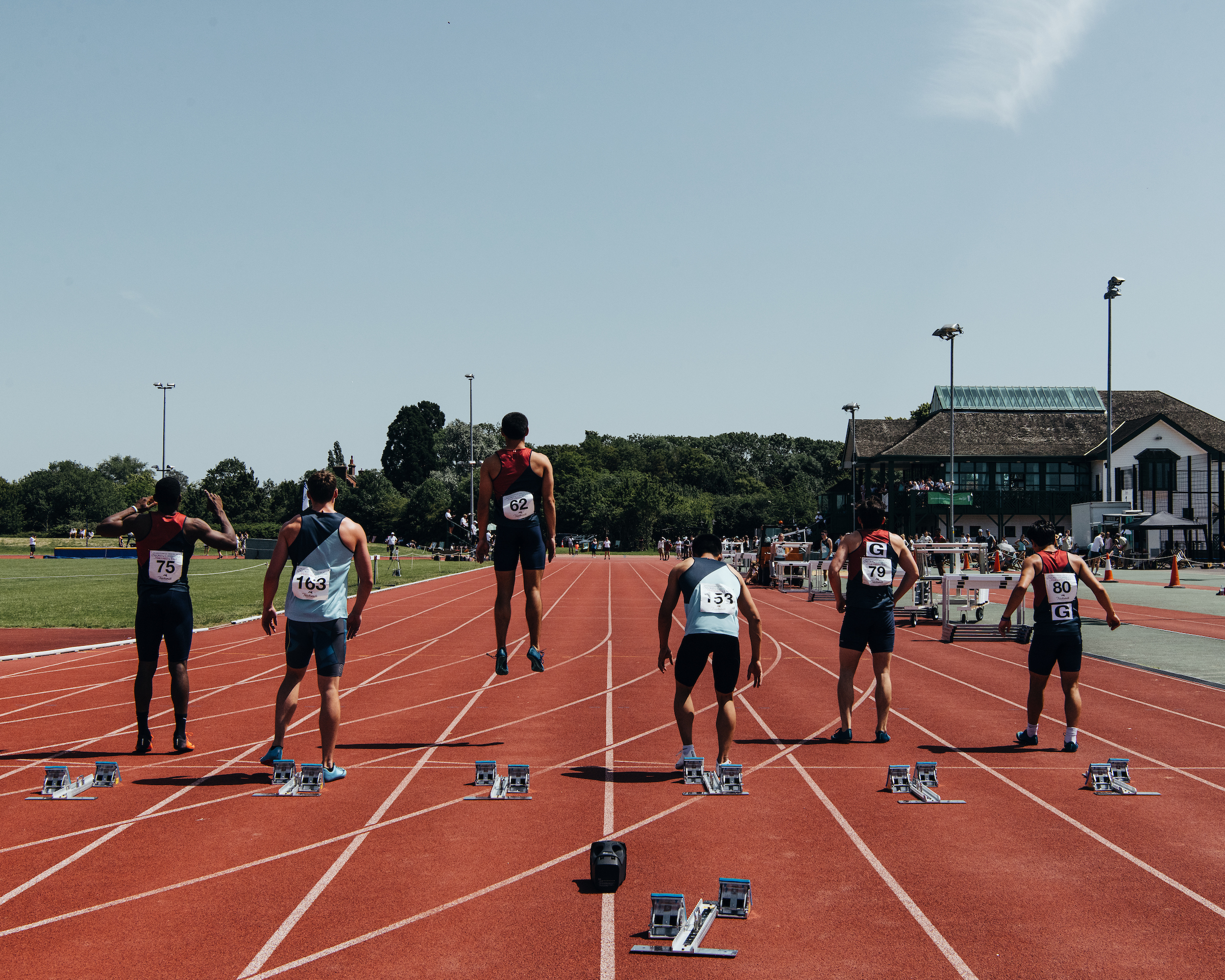 There are many ways that these issues could be solved. However, the point of this piece is not to advance one solution over another but to highlight the issue and bring awareness to a status quo that does not benefit women, men, or the sport that we all hold so dear, track and field.

At the very least, it is not right that duplicate and triplicate counted women can be viewed as being equivalent to unduplicated men’s rosters. The spirit of Title IX is about expanding opportunities that will benefit actual individuals, not foster manipulated ratios. Universities and the NCAA know this and should work to ensure this principle is followed.

There should also be greater coordination between university athletic departments and admission offices to address growing gender imbalances between female and male enrollments. A major, co-ed university on the west coast is 63 percent women and 37 percent men. Their freshman class is 68 percent women and 32 percent men. It is an objective good that more women are going to college, but if fewer men see education as a route to self-improvement, that is a troubling trend. Universities committed to co-education must also commit to ensuring that young men continue to have opportunities for educational advancement.

Lastly, the federal government can take a more proactive approach to Title IX enforcement instead of relying on individuals or groups to file federal complaints or lawsuits to spur enforcement.

These issues are complicated. But at the same time, they are relatively simple: Title IX is about expanding opportunities. We have the tools and the ability to ensure that the law is enforced in a way that serves the collective benefit of young people of any gender. Let’s challenge our institutions and their administrators to take the spirit of this law and make it their Northstar so that as many young people as possible can enjoy the benefits of education, sport, and a full college experience.